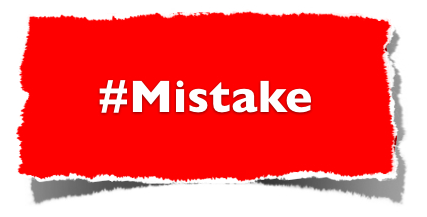 Posted in Business Advices
by moPosted on November 22, 2019

Mistakes happen, we know everyone makes them, we are only human and in general are fallible. Hindsight would be a wonderful thing to save those mistakes from happening, to protect us from embarrassment and the sinking feeling in the pit of our stomachs.  Like many entrepreneurs, Mark Zuckerberg believes, “Don’t even bother avoiding making mistakes, because you’re going to make tonnes of mistakes and the important thing is to learn quickly from the mistakes you make and to not give up.”

Success is not in a magical pot at the end of the rainbow, ‘Before you succeed you first must learn to fail.” Making mistakes allows us to discover more about ourselves. In business, they can be valuable lessons to enable growth. The fear of failure has created a stigma that goes along with making mistakes. There is such a thing as a good mistake; these are made through a strong and educated action, that may have had a bad result, there is no shame in that. It is possible to learn from good mistakes and use the knowledge gained in your next action. Bad mistakes are made with little thought and effort and as a result, bad results are inevitable.

There are many other blunders in business from a weak or non-existent business plan to overspending. A lapse in judgment in those we partner with or work alongside us is typical when starting up. Working with the wrong people who do not share your vision or compliment your abilities can quickly become a big mistake. This isn’t just because of the time and money of having to find new people but the clean-up of the havoc they leave behind and that is depending if it is as simple as cleaning up spilled milk. Without making this mistake, you are relying on luck to find a perfect match rather than a choice made through the knowledge gained in making that mistake.

Mistakes happen whether you are starting up or well established in the market. Kodak patented the first digital camera, but as they made so many sales in film cameras, going digital was forgotten until it was too late. Blockbuster Video was left in the dust by Netflix because they became more retail than entertainment based and Nokia stunted their growth by refusing to go android. This shows that a company needs to move with technological advancements and be able to see the possibilities of the future, so there are no missed opportunities.  “If something’s important enough, you should try. Even if the probable outcome is a failure.”