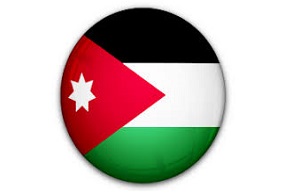 Under the 1952 constitution, the country is a hereditary monarchy with a parliamentary system. The country consists of 12 governates and the current head of state is King Abdullah II. The current head of government is Prime Minister Abdulla Al-Nsour. The Cabinet is nominated by the prime minister and appointed by the king.The bicameral National Assembly consists of the Senate (55 seats appointed for a four year term) and the House of Representatives (120 seats, twelve of which are for women) elected by popular vote for four-year terms. The last elections took place in 2010.

Major imports are crude oil, electrical machines, appliances and plant machines, equipment and accessories, animal or vegetable fats and oils and their fractions, knitted fabrics, pig iron and steel, motor vehicles, tractors and motorcycles, plastic and its products, natural or cultured pearls and precious or semi-precious stones, diesel oil, petroleum spirits (benzene), paper, paperboard and its products, aluminium and its products, articles of wood and wooden charcoal, and cotton.

The Jordanian banking system is one of the smallest in the Middle East; the system is overbanked with 23 banks, including three Islamic banks and eight foreign bank branches that serve a population of 6.8 million. Jordan’s largest bank, the Arab Bank, dominates the banking system, accounting for more than half of the total banking assets. The largest five players, the Arab Bank, Housing Bank, Jordan Islamic Bank, Bank of Jordan and Jordan Ahli Bank, together control more than two-thirds of the total assets and three-quarters of total deposits.

During the last few years, Jordan enjoyed high growth levels propelled in part by investment inflows and exposure to high regional liquidity fed by petrodollars. Banks fared well, and in fact showed an unprecedented performance in terms of operating revenues, deposits and credit facilities. Their investment portfolios also generated very high revenues leading to an overall expansion of the sector. In the near future though, the profitability of banks could be affected by higher credit costs as a result of the global financial crisis. The down turn in the Amman Stock Exchange could also have a number of repercussions including, lower trading income and brokerage fees. The fundamental credit outlook for Jordanian financial institutions is stable because banks enjoy solid financial fundamentals. However, banks are becoming more exposed to the volatile equity and the struggling real estate markets. On the whole, Jordanian banks have modest risk profiles because they are inclined to offer the most basic financial instruments. Nonetheless, they are susceptible to high levels of systemic risk stemming from their exposure to the Palestinian territories and the political instability in the region.

Free zones offer the necessary facilities, services and infrastructure for business, such as electricity, water, modern telecommunication networks, as well as modern networks of internal roads, yards and storage facilities. There are also branches of banks, insurance and clearance companies inside the free zones.

Companies can be registered inside the free zones instead of the Ministry of Industry and Trade (MIT).

Exemptions for businesses in free zones include:

− Exemption on project profits from income tax for goods exported outside the Kingdom as well as transit trade, in addition to any profits accruing from the selling or transferring of goods inside the borders of the free zones

− Exemption on import fees, custom duties and all taxes and fees accrued thereon, except services and rent charges for all imported or exported goods (other than those destined for the domestic market)

Jordan’s free zones areas were established to promote export-oriented industries and transit trade. Commodities and goods of various origins are deposited in the free zone areas for the purpose of storage and manufacturing, without having to pay the usual excise fees and other taxes since they are treated like goods outside Jordan. There are currently 17 private free zones in the Kingdom and five public free zones (as shown in the table below).

This is where partners are jointly responsible for the management of the company’s activities, with full liability over the company’s private properties, debts and liabilities.

This is where partners contribute to the company’s capital without having the right to manage the company or perform its activities. The liability of such partners is limited to their capital shares.

The company’s capital is declared within the Company Founding contract and its Memorandum of Association. This is the maximum capital that can be claimed for the duration of the company.

This is a company founded by a maximum of 20 natural partners, all over 18 years of age.

This is a company founded by natural founders, either over or under 18 years of age. Those over 18 are the general partners who are responsible for the day-to-day management of the company. Limited partners contribute only to the capital of the company but have no authority in or involvement with its management.

This is a company founded by two or more partners, their liability determined in accordance with their capital shares.

This is a company founded by a number of promoters, with a minimum of two subscribers. The liability of shareholders is limited to their capital shares. A public shareholding company can consist of one person, but only upon the approval of the Minister andController of the MIT.

This is a foreign nationality company registered outside the Kingdom with its head office located abroad. A branch office for that company is operated in Jordan mainly for the execution of a contract with a Jordanian employer. There are no restrictions as to the type of employer. The employer can be governmental, another company or an individual. An example of this would be a construction contract.