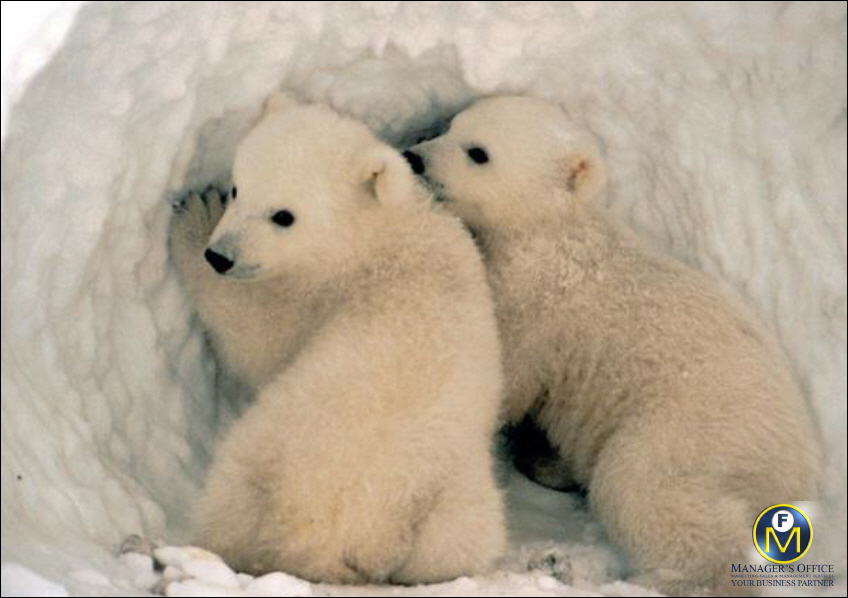 Polar bear cubs are born November through January in a den. Mother and cubs emerge from their den in late March or April.

Most adult females give birth once every three years. In populations with access to abundant food, birth occurs once every two years.

The most frequent litter size is two, followed by litters of one. Litters of three are less common than twins or singles, and litters of four are rare.

Polar bear cubs are born small and helpless, with their eyes closed.

The fur is very fine at birth, making the cubs look hairless..

Cubs open their eyes within the first month.

The cubs begin walking while in the den at about two months. By this time, they also have thick, whitish fur and their teeth have erupted.

Mother and cubs remain around the den for about 12 more days, sometimes longer.

This enables the cubs to acclimate to the colder weather and develop their walking muscles.

During this time the cubs still spend about 85% of their time in the den, sleeping there at night.

When ready, the mother polar bear leads her cubs to sea ice. Travel is slow with frequent rest and nursing stops. A mother sometimes carries her cubs on her back through areas of deep snow or water.

Cubs begin eating solid food as soon as their mother makes her first kill on the sea ice (about three to four months of age).

The cubs grow quickly on their mother’s fat rich milk and on seal blubber. By eight months of age, they weigh more than 45 kg (99 lb.).

When her cubs are about 30 months old, a female polar bear is ready to breed again. At this time, an adult male may begin following her. Either the mother bear or the male chases away the cubs.