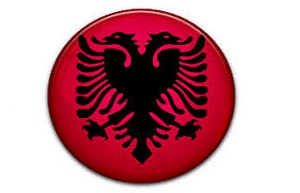 Albania has a population of 2.8 million inhabitants (September 2011) which consists mainly of ethnic Albanians (97%).

The remainder are of Greek, Macedonian, Gypsy, Roma, and other descent.
Albania has a relatively young population; the average age is 35.3 years.

There are three principal religions in Albania, namely Islam (58% of the population, mostly

belonging to the Sunni sect), Orthodox (6%) and Roman Catholic (10%). Albania is known

for the tolerant and peaceful co-existence of its religious communities.

The official language is Albanian, which is written in Latin script and has 36 letters. Due to

Albania is a parliamentary republic. The parliament (Kuvendi Popullor), composed of 140

members, holds the legislative power. The executive power is held by the Council of

Ministers, which is chaired by the prime minister, who is appointed by the president of the

republic upon the approval of a parliamentary majority. Ministers are appointed and

removed by the president of the republic, upon the proposal of the prime minister. The

The Albanian currency is Lek (ALL), although US dollars (USD) and Euros (EUR) are

There is no specific law regulating the payments system in Albania. Payments between

and are subject to the Albanian civil code. The use of foreign currency is allowed as a

means of payment. There are no constraints on trading with hard currency.

All commercial banks licensed by the Bank of Albania may carry out foreign payments. The

Bank of Albania, which is responsible for managing the foreign currency reserves, is also

active in performing international payments. Every local or foreign person may own an

unlimited number of accounts in any currency, in any bank in the country.

The sources of law in Albania are the constitution, ratified international conventions, the

acts of parliament, and the normative acts of the Council of Ministers. The territorial

local government exercises its jurisdiction. The normative acts of ministers and other

government institutions apply only within their area of material jurisdiction.

The Albanian judicial system is composed of 29 courts of first instance, six courts of appeal,

one military court of appeal, the Supreme Court, and the constitutional court.

Human Rights. Consequently the Albanian government may be held liable in front of the

European Court of Human Rights. As a member of the United Nations (UN), Albania is a

party to the Statute of the International Court of Justice. Albania has ratified the Rome

Statute of the International Criminal Court. Albania is also a party to the European

Albania is one of Europe’s developing countries. The government has been pursuing full

integration into the Euro-Atlantic community for several years. In June 2006, Albania

toward EU membership, as well as a free trade agreement giving Albanians duty-free

access to key EU markets and opening the country to imports. In April 2009, Albania also

in the Schengen area without need of a visa.

With the global economic slowdown, Albania has been affected during recent years and

remittances sent by emigrants to their families in Albania (remittances in 2014 totaled EUR 592 million against EUR 952 million in 2007 (the highest).

Albanian GDP growth saw a sharp slowdown in 2010 and 2011, but started picking up in

total assets. This has led to more competition and better availability of services.

Supervisory regulations have been strengthened to preserve financial stability. In response

to the global financial crisis, the Central Bank of Albania acted to increase liquidity and

maintain public confidence. With little or no direct exposure to recently troubled

international financial assets, Albania’s banking system has been able to withstand the

activities may have bad impact on the environment or the Albanian national heritage).

(physical and legal), subject to licenses released by the economic zone’s administration.

Administration of assets (concession) in economic zones, whether public or private

property, as well as services and/or activities of national or local interest, can be subject of

licenses. This is accomplished through an agreement by which the administration of the

operator, the operation right and duty of the management of the assigned asset , in

exchange for an amount which will constitute income for the respective administration.

Developers and operators, as well as users, can be Albanian or foreign persons; the law

treats them with no discrimination, giving them the same rights and same duties.

incentives to business. Services, products and other goods which are introduced in the

economic zones or will be exported to other countries, benefit from custom duties

exemption as well as exemption from VAT payment. These exemptions apply only to

economic zones which do not have the status of an industrial park.

According to Law no. 9789/2007, the industrial park is defined as a precisely determined

area where industrial production and service activities are performed with special

incentives, for the purpose of optimising the human and material potential within an area.

be managed by commercial companies, set up in accordance with Law no. 9789/2007.

According to Law 9789/2007, free zones are expressly delimitated, having a specific

customs regime which limits customs only to the borders of such areas. The setting up of

the territorial area of the free zones, customs offices and border police points is carried out

pursuant to a government decision granted upon each proposal.

Means of transportation, products and other goods are accepted within the free zones

with no restrictions concerning the country origin, or destination country. The import of

to which Albania is a party, is nevertheless forbidden.

Since 1995, following the process of the opening and liberalization of the market, the

Albanian government, supported by the IMF, European Union, the Treasury Department of

the United States of America and other organisations, has adopted a series of tax laws.

Currently, the legal framework regulating the tax system in Albania is based on:

and its subsequent amendments

Electronic declaration is obligatory from January 2011.

December 1998 and subsequent amendments which came into force on 21 January 1999,

has substantially changed the tax system.

Liable to the tax on profit are:

Law No. 8438 establishes the criterion of territoriality i.e. all sources of income are taxable,

even if sourced abroad. Subject to income tax are legal persons having their headquarters

(residence) in Albania, as well as legal persons not resident in Albania, but still having

sources of income produced in Albania. A legal person/entity is considered as a resident

affairs in the country.

Since January 2014, small entrepreneurs (natural persons or legal entities) which have a

For other small entrepreneurships, making a turnover between ALL 2–8 million per year,

For all other companies, the tax on profit is 15%.

Law 8438 introduced a list of non-deductible expenses. Items which cannot be deducted –

 Costs inherent to the acquisition, improvement, renovation and reconstruction of

 Pay and any other form of compensation related to employment, payment of which is

not made through the banking system etc.

 Any other expense that is not documentable.

The tax on dividends distributed by companies, consortiums or groups of companies that

applied in respect of persons that:

 Are subject to VAT

of the initial share capital of the company, consortium or group.

believe the current year’s profits are higher by at least 10% over the period of reference.

between the owed and the stated amounts.

Since January 2014, the tax on personal income from employment was shifted back to a

progressive taxation system (as it used to be before 2007).

Personal tax has the following brackets for a monthly gross salary:

The following are required to pay tax on their entire income:

Non-residents are subject to tax only on income earned in Albania.

On other income subject to taxation, for which there are no specific law provisions, a 10%

European Laws in the new Law.

According to current requirements all legal and natural persons performing taxable

supplies that have an annual turnover exceeding ALL 5,000,000 are subject to pay VAT.

activity. Natural persons and legal entities operating in the import/export industry are

required to register regardless of the amount of their annual turnover. A special office

dedicated to VAT registration operates in each district tax office.

According to the Decision of the Council of Ministers No. 18 dated 12 January 2011, natural

lawyers, accountants, architects, doctors etc, are always subject to VAT, no matter their

The VAT rate is 20%. The taxable amount is the value of provided goods and services

or place of residence (if individual) is located in Albania

 Provision of goods or provision of services relating to commercial or industrial shipping.

Under certain circumstances, the fiscal authorities make a discrete assessment of the VAT

payable amounts and give written notice to the taxpayer. A taxpayer wishing to contest the

amount of such obligations shall, in any case, first pay the disputed amount and only then,

within 30 days from the date of notice’s receipt, present their case in front of the Taxes

General Directorate. This body will inform the applicant, through a written reply, about

whether their application has been accepted or rejected.

Law No. 92/2014 grants to taxpayers who export goods, the right to request a VAT refund

in cases of a credit higher than ALL 400,000 (EUR 3,200) for three consecutive months. The tax credit will be repaid by authorities within 60 days of the taxpayer’s request.