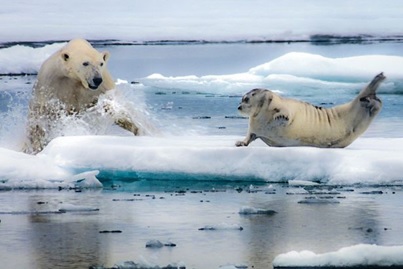 While it seems hard to believe, given the nature of the climate they live in, polar bears can in fact overheat. Since they have two thick layers of fur and a thick layer of body fat, they have more of a chance of overheating—especially when they run—than they do of freezing, according to Polar Bears International.

Polar bears are known as the “apex predators” of the Arctic, which means they are the top predator and have no natural animal predators that seek them as prey. So what is the biggest threat to a polar bear? Climate change. According to Discover Wildlife, polar bears need sea ice to “hunt seals,” and the reduction of sea ice through climate change is leading to “fewer cub births and reduced survival rates.”